The idea of building a wayside shrine emerged from our Castlegate project, which consisted of research on this area of Aberdeen and exploring some possible ideas on artwork that could be placed within the Castlegate Square.

Maybe it is just partly true, because I have fancied the aesthetics of polish wayside shrines for ages…. That is why I am very glad I finally have a good opportunity to create one of my own!

What is particularly exciting for me in this idea, the shrines (or grottos?) are absolutely amazing in terms of aesthetics- partly kitsch, partly supernal- always outstanding in the rural or urban landscapes. Usually built in diy manner consist of surprising combinations of colours, holy images and statues, plastic flowers (how easy to maintain!), ribbons, sometimes electrical lighting. Some of them just in a shape of wooden boxes attached to buildings, others creating  own environment inviting to come and spend few moments sitting on a bench. Urban lampoons or half- sacral places of contemplation. I think it would look absolutely great in grey Castlegate surroundings! 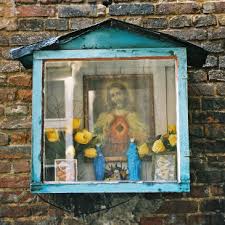 But what is the connection between those and Aberdeen?

So… I started this research, ambitiously, from visiting the City Archives. I was looking for something complementing my research about Jarmark Europa in Warsaw. Knowing, that there used to be a market in the Castlegate area I was looking for some exciting similarities. However the shape and nature of these two marketplaces are extremely different so I couldn’t really link it this way. Also, being interested more in contemporary issues I returned in a way defeated.

But, the lovely team I had pleasure to meet at the archives told me about some Polish Scottish relationships, especially during World War II.  However it was very interesting to listen to it, unfortunately it wasn’t what I was looking for either. I think that the subject of WWII, especially in relation to Poland is dated and tired. I didn’t want to produce another pompous, gloppy artwork. Anyway, this visit gave me some reasonable foundations for centering my research around Polish community.

Following this route I ended up in Polish Association’s office located just around the corner from Castlegate. There, I could listen to the stories about what they exactly do, what problems do Polish people have and what do they do to sustain they original culture. Anyways, I found out that there is about 26 000 Poles in Aberdeenshire, living in different levels of acculturation. Some of them forming various groups aiming to sustain and promote Polish culture here in Aberdeen.

So here I am in a sort of perfect situation. I can now freely focus on researching this subject without limiting myself to addressing my works to only Polish communities. Because of current political situation, this subject does not only relate to a certain group but also to whole society of Britain. Then, a brexit on top of it all makes it even more fascinating, very complex sociological phenomenon. 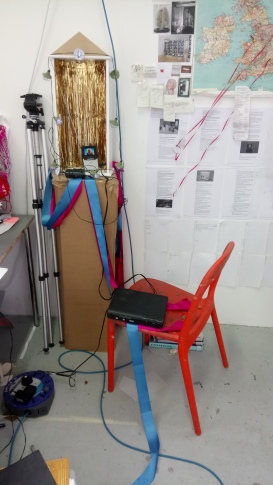 I kind of knew what I wanted it to look like from the beginning. I decided to use a store bought bathroom cabinet with a small triangular tympanum cut from a mdf board. Inside, I am about to put a small tv screen with looped short animation- A mother Mary crying tinsel tears.

The base was cut and shaped out of a polystyrene cube, which after putting a layer of paint over it, looks like a piece of plastered wall. The blue was obviously inspired by the photos of Warsaw’s grottos posted above. It is a very striking, bright colour which additionally gives some ironic twist. It doesn’t belong to grey landscape of Aberdeen, nor Warsaw.

Very important element of this installation (sculpture?) are decorations. Christmas lights, which look like someone just randomly put whatever he had. Also fake flowers. I spent hours on eBay to look for those the ugliest. And here they are.

Awful in both shape and form. Available in many colours, remind me of homeland and aesthetics of communal cemeteries on the 1st of November. Simply perfect.